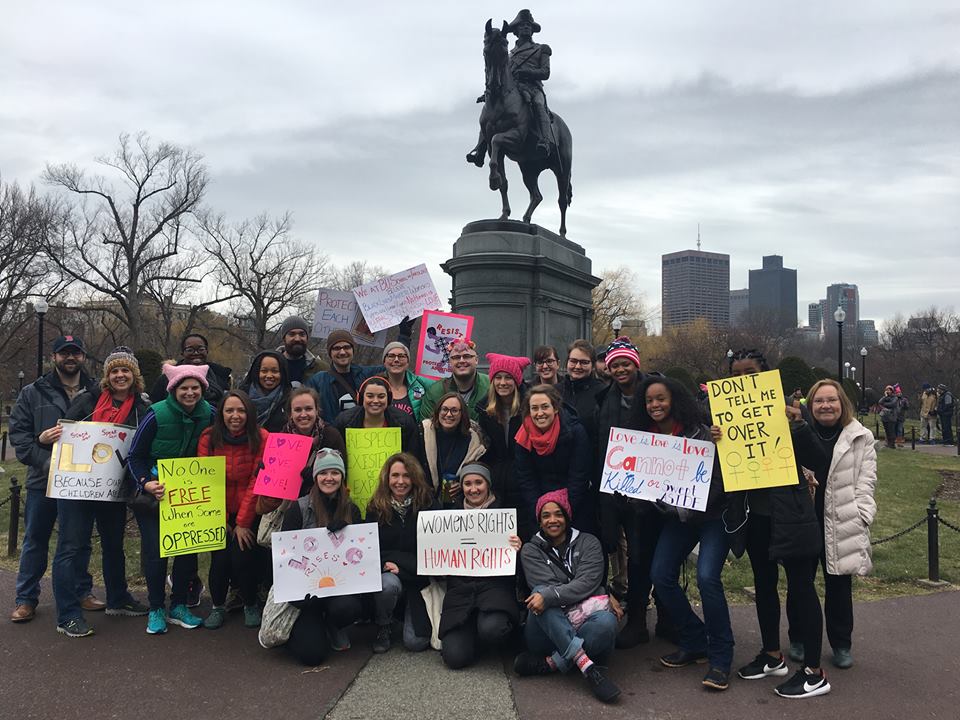 On Saturday, January 21st, a group of students met at Boston Common to join in the Women’s March. Here are some of their reflections and responses to the day.

“I had the opportunity to participate in the Women’s March in Boston. I gave it some thought the morning of about what it meant. Here are some of the thoughts that came to me that morning. A protest is against something. A march is for something. I am not marching against anyone, rather, I am marching for the brotherhood and sisterhood of all mankind. Never fear being good, for standing up for what is good and principled, and revealing yourself to be as God made you to be. Be willing to see love expressed everywhere today and rejoice in this moment of unity.”
–Kelsey Lyon, 1st-year MDiv

“After I marched, I had to go to work. On the train to work, I happened to overhear the conversation of the mother and daughter sitting next to me. They had been at the march. I could tell because the daughter was carrying a sign, all rolled up and tucked underneath her arm. The entire ride, the daughter kept asking her mother why they went to the March, and why it was important. The mother explained, in a way that her daughter could understand. She told her daughter that the reason they marched is because they wanted to fight for the rights the Constitution promises for all Americans. And then the mother recited the Preamble to the Constitution. The daughter repeated after her, stopping every once in a while to ask what certain words met. The mother answered all of the daughter’s questions, and not once did she brush off any explanation. The mother engaged the daughter in a real conversation. It was amazing to witness, because it reminded me that one of the best ways to change the world for women is to raise strong, curious, questioning, critical, and smart women. My heart had been full from the sights and words during the March, and in that moment, it overflowed.”
–Elizabeth Hurd, 1st-year MDiv

“We prayed with our feet today. I prayed for the women who taught me to speak up and stand up. I prayed for the voices that have been silenced. I prayed for a future where we all see the value and dignity in all – where we see the Light of God within all. I prayed for my kinfolk around the world who also believe that Love is greater than hate.”
–Matt Lewellyn-Otten, 2nd-year MDiv

“When asked why I was marching I said ‘To uplift the legacy of Marsha P Johnson and Silvia Rivera and all of the trans women who unapologetically and disrespectfully paved the way for me and my queer&trans siblings to be able to stand here today.’ And while standing there, listening to speaker after speaker, I realized not once. Not Once. Was the work and activism of trans women, especially trans women of color, mentioned amongst the very reasons why we marched today. So yes, I did march. No, I did not regret it. But I do not only support my CISters while my actual trans sisters and femme siblings are erased and silenced.”
–Nathan Bakken, 3rd-year MDiv